Lucky for us, modern VFX studios are dropping breathtaking visual masterpieces on the regular, but a few short years ago, this wasn’t the case. Sometimes we were confronted by visuals so clunky, jarring or ugly that you’d wish they scrapped the live action entirely and just done the whole thing in animation.

Not to mention bad practical effects, sparse visuals, lack of detail, misuse of source material and a failure to capture the essence of the original are all issues that seem to be rife in live-action adaptations.

Here are 10 movies that we think could have been good (or better) with a competent animation studio at the helm. 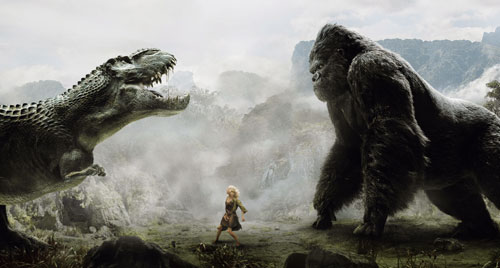 Peter Jackson’s ambitious remake of the 1933 classic does some wonderful things with animation. Andy Serkis puts on an amazing motion capture performance, facilitating the breathtaking digital asset of Kong himself, yet the intersection between CGI and live action is where things fall apart.

As it often did, reality casts a cold and unwelcome light on VFX here. The offending scene that made me think of King Kong is the stampede. The lighting is all over the place, the force of the dinosaur’s rampage just doesn’t hold any weight and the actors are obviously hanging out in a green screen studio. The animated characters were the most breathtaking part about this movie, please just make it all animated next time to avoid the awkward mash of live action and animation.

This reboot/sequel had big expectations to live up to. When the whole thing about your franchise is the stylised, cyberpunky visuals, you have to get it right.

What’s with that awful, unwelcome appearance by a CGI Jeff Bridges made to look like his younger self from the original, then? Do away with that gimmicky tat and give Tron a shot at a fully animated film. Loads of vibrant neons and highly contrasting blacks, please. It will look so arty and stylish.

Charlie And The Chocolate Factory (2005)

Apparently Roald Dahl hated the 1971 version of this movie, so his estate were resistant to let another cinematic representation of his book loose upon the world. When finally they did relent and grant permission for this to be made, it goes to Tim Burton (snooze) who immediately sticks Johnny Depp and Helena Bonham Carter in it. Do those 3 have a blood pact or something?

This visuals in this remake are actually not bad, but given that the 1971 version still holds up, animation could have breathed so much more life into this movie without Depp’s bizarre Michael Jackson-esque performance.

Oh dear, this was never going to go well, was it? Akira Toriyama’s Dragon Ball series is an anime so stylised, it’s a fool’s errand to try and recreate it in live action.

Someone should have just watched the hair and makeup department try to model Goku’s iconic hair style on a live actor, realise that the project wasn’t going to come together, and scrap the whole thing there and then. Instead, we get this mildly racially insensitive slap to the face for a beloved series.

Look at Ghost in the Shell, The Animatrix, Akira – all incredible animated imaginings of a cyber future that is at once unsettling, engaging, alien and familiar. Too often does live action sci-fi come off as campy and awkward or just insufficient in representing technology in an interesting and convincing way.

I didn’t know how much I needed an animated Bladerunner until I watched the animated short to promote Bladerunner 2049 (2017) directed by Cowboy Bebop director Shinichiro Watanabe: Blackout 2022.

Just up top: I love this movie and its gritty, neo-noir vibe, but technical limitations at the time meant that a decent chunk of it is spent flying over a mostly black cityscape, with Harrison Ford occasionally gooning out of the window of his flying car at some giant advert.

This movie was supposed to be a celebration of dark universe cinematic universe (DUCU, it will catch on, you’ll see) characters and monsters. But bad CGI and incongruous visual styles really stand in its way.

Aside from the cringe-worthy stretchy mouthed vampires, Wolfman and Frankenstein’s Monster are the worst offenders. Lovers of classic Universal movie monsters, preserve your reverence and swerve this movie.

Young adult literature has had its fair share of disappointing movie adaptations: Eragon, The Golden Compass and now this. Just because Harry Potter managed to pull it off, doesn’t mean it’s easy.


The VFX in Percy Jackson just doesn’t have the beauty and majesty demanded by the classical greek themes of the source material. They sacrifice detail especially when it came to the magical creatures from the series. It’s these ugly visuals and their awkward interaction between live actors which make this such a depressing example of lost potential for young fans of the series.

The League of Extraordinary Gentlemen (2003)

Based on, and immensely inferior to, Alan Moore’s 15-issue graphic novel series, LXG was set to be a treat to fans of British literature. Yet, by way of Sean Connery’s hammiest performance to date, atrocious handling of the source material and wacky, underwhelming CGI, this flops hard.

This movie’s interpretation of Mr Hyde takes the biscuit. Even if you squint at him, it’s pretty tough to discern anything from The Strange Case of Dr. Jekyll and Mr. Hyde, a 1886 novella by Robert Louis Stevenson which serves as his source material. Hey Dr. Jekyll, why don’t you just transform into a decent animated movie next time?

Poor Alan Moore, he’s so burnt out on Hollywood adaptations of his phenomenal work that after Watchmen (2009), he’s vowed to never again lend his portfolio of graphic novels to film ever again. That being said, V for Vendetta was a great (and rather faithful) cinematic version of his dystopian political thriller.

Whilst the visuals were striking and memorable here, looking over some of the panels from the graphic novel makes me think that animation would have just elevated the atmosphere still further. Otherwise, perhaps they should have gone full Sin City with it.

This movie is often cited (especially by video game fans) as one of the worst films ever made. It ended the careers of both directors, treated the source material as more of a suggestion and scared Nintendo into never making another live action movie.

There must have been long meetings about how they could represent such an iconic video game series in live action, but however long they were, they should have been much longer, because this is utter sewage. Everything just has this weird, dirty metropolitan look. Rusty pipes, unnecessary sparks, lots of slime – nothing remains of the iconic, colourful video game inspiration. Honestly, the whole thing just looks gross; after watching some clips I feel like I need a shower.

Animated attempts at Mario have been received with mixed response, though. The Super Mario Super Show’s animated segments were bonkers and weird and definitely not canon (see the Toad head/hat debate) but actually colorful, fun and endearing!

The amount of visual freedom animation provides is staggering: if you can imagine it, you can do it with animation. So which movies do you wish you could have seen as animated masterpieces? Give us a shout on Facebook.com/fudgeanimation or @fudgeanimation on Twitter!

The Best Video Games for Creatives